The collective term chronic inflammatory bowel disease (IBD) embraces several clinical conditions characterized by intermittent or continuous inflammatory changes in the intestines. The most important chronic inflammatory bowel diseases are Crohn's disease and ulcerative colitis. Around 300,000 people in Germany currently suffer from these two diseases, which are associated with years of abdominal pain and diarrhoea, but also with severe fatigue. After prolonged disease progression, numerous extraintestinal manifestations (e.g. joint inflammations) can occur. The diseases usually occur at the age of 20 to 30 years, but infants and adolescents can also be affected. The exact causes of these diseases are still unknown. It is assumed that there is a genetic susceptibility, with environmental factors eventually triggering the onset of disease.

In both diseases, medication and surgical measures can alleviate symptoms and help avoid complications at least partly. Crohn's disease so far cannot be cured; ulcerative colitis may be cured by surgical removal of the entire colon including the rectum. Surgical measures, however, are often associated with complications and reduced quality of life.

The aim of therapy for both diseases is to reduce the inflammation with anti-inflammatory drugs. Given that these diseases are chronic conditions, drug therapy is usually permanent. In addition, the therapies are systemic treatments. Until now, there is no therapeutic approach that sustainably improves the dysregulation of the intestinal immune system.

The intestinal flora (microbiome), which is strongly influenced by diet but also by administration of antibiotics, plays an important role in the development of chronic inflammatory bowel diseases. This is why nutrition and alternatives to antibiotic therapy play an increasingly important role in new treatment concepts for these diseases.

The project is aimed at identifying suitable AhR ligands

The AhR plays a key role in the communication between immune cells and intestinal epithelial cells. AhR ligands from food or intestinal flora activate the AhR, thereby promote the survival and proliferation of immune cells and thus substantially contribute to immune cell homeostasis.

Preclinical proof of the therapeutic efficacy of two non-toxic AhR ligands has already been provided in the mouse model of chronic dextran sulfate sodium (DSS)-induced colitis, the most accepted standard animal model of IBD. Based on this preclinical proof-of-concept study, the present project aims to identify suitable AhR ligands that have already been approved for the treatment of other diseases or for which first results from clinical studies are already available (repurposing). The efficacy of identified AhR ligands will then be tested in the chronic DSS colitis model and in a bacterial-induced chronic colitis model in the mouse.

To identify suitable AhR ligands, repurposing libraries will be screened at Fraunhofer ITMP ScreeningPort. Efficacy of the newly identified candidates will be tested in vivo at Fraunhofer IZI. Analyses in these disease models include in-vivo monitoring (endoscopy) as well as histology, immunophenotyping, microbial analysis, proteome and transcriptome analyses. These will be performed at Fraunhofer IZI and IIS.

Chronic inflammatory bowel diseases are associated with long-term therapy, sometimes surgery, and a significantly reduced quality of life for patients. If the therapeutic efficacy of AhR ligands for the treatment of chronic inflammatory bowel diseases can be proven in animals and subsequently also in clinical trials in humans, a novel therapeutic approach for these diseases will be available.

AhR ligands showing efficacy for the treatment of IBD and proving safe and tolerable in in-vivo tests subsequently will also have to prove their safety and efficacy in humans in a first proof-of-concept study. 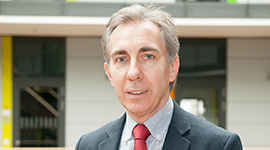